In the fortnight that I’ve been back in Toronto, I’ve been catching up with my online work now that I’m back on the rapid, reliable data upload and download side of the digital divide. I've finally started to digest and reflect on my pretty epic four-month trip to India, Bangladesh, Australia, New Zealand and Pakistan.

In Australia, I visited York International's exchange partner institution, Monash University in Melbourne for a month in April 2018. While there, I took a three-day trip to New Zealand, to meet biologist, and fellow woman in STEM, Dr. Vic Metcalfe in real life. I first got to know Vic through her blog, the Ice Doctor, and her social media outreach. While planning my Australian itinerary, I asked her if a trip to Christchurch was a crazy idea. Vic explained that lots of New Zealanders head to Melbourne and Sydney for a long weekend, so that settled it for me. Building facade in downtown Christchurch propped up by stacked containers

In Christchurch, the evidence of the recent deadly earthquakes was everywhere, from the condemned buildings to the wide swathes of green space in the downtown. Vic explained that many people who moved away when their homes were condemned, have still not been able to return.

This was my first visit to New Zealand, which I had only ever read about or seen in films, though I have a written about its Biosecurity Act, and invasive ecology in books and journal articles. I arrived in Christchurch with a list of some of New Zealand's charismatic endemic species that I hoped to see. Here are some of the highlights from my visit with Vic, and her daughter. I spent the entire three days fangirling over the biodiversity. I was privileged to be introduced to the amazing biodiversity of this very distant part of the world from Canada, by an expert scientist 👩🏼‍🔬 and science communicator. I had previously learned, from twitter, that Vic’s dad, Lawrie, who, sadly, died last year, was one of New Zealand’s foremost botanists and horticulturalists, and I was delighted to learn more about his books. While I was thrilled about seeing New Zealand's indigenous flora and plant communities, I was also keen to see some of the birds. I had learned about the endemic bird species, like the takahe, a grazer, while I was doing my doctorate at the University of Oxford's Edward Grey Institute of Field Ornithology.

Many of New Zealand's flightless birds are extinct, and others are rare and endangered, so I knew that I would be seeing some birds in captivity. This was the case with kiwi and takahe. BUT, Vic also took me to Arthur’s Pass National Park to see the famous alpine parrot, the kea, the star of many YouTube videos.

I won't write much here, except to say that, apart from the introduced, invasive, non-indigenous plant species, which I knew well, I spent a lot of time simply gaping at flora that was completely new to me. It was wonderful to have Vic interpret the vegetation for me. Here, she is identifying species in the alpine grasslands along the way to Castle Hill basin. She learned about New Zealand's botany from her father, the horticulturalist, Lawrie Metcalf. 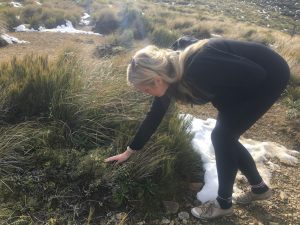 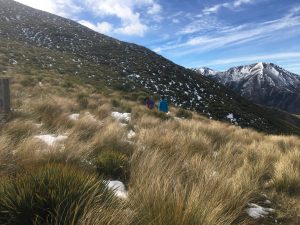 My next Wikipedia page will be for Lawrie Metcalf Vic and her daughter at the Lawrie Metcalf Herbarium, Christchurch Botanical Garden

I discovered that Lawrie Metcalf was an early advocate for planting indigenous flora in gardens. He wrote many natural history, gardening and plant identification books, including some that I brought back to Canada.

The herbarium at Christchurch Botanic Gardens is named after him, and we were lucky to get inside for a peak at it. However, I was dismayed to learn that the herbarium is currently closed, without a curator, and I hope that the local council understands the importance of taxonomy for biodiversity conservation.

Readers of this blog will know that since 2014, I have been giving students assignments that involve creating Wikipedia pages for women in STEM, and that I organize and promote Ada Lovelace Day Wikipedia editathons. However, there are also many male biologists who deserve their own Wikipedia page, and I will be making one for Lawrie, or if someone else gets to it first, I will be expanding his page. 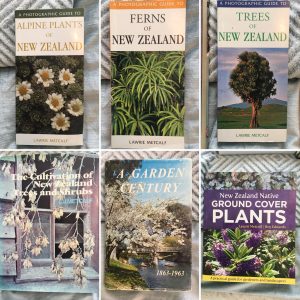 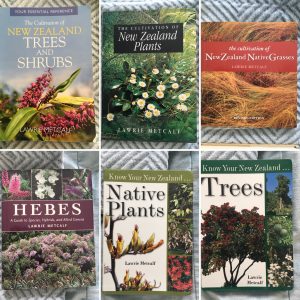 Some of Lawrie Metcalfe’s botany books