By the time the York University leadership cancelled in-person classes on Friday March 13, 2020 in response to the Covid-19 pandemic, I already knew that in-person April exams would inevitably be cancelled, along with in-person Summer Semester courses: the novel virus SARS-CoV-2 was entering its exponential growth phase by the time the pandemic was declared.

I simply assumed that fellow professors would look at the real-time data for the spread of Covid-19, and comprehend that the failure to contain the virus in Wuhan in early January 2020, meant that we faced months of lockdown in efforts to contain community spread and "flatten the curve". This is basic ecology for invasive species.

David Robson's excellent article, Exponential Growth Bias: The Numerical Error Behind Covid-19, published on August 12, 2020 on the BBC Future Website explained for me why so many people, including scientists, simply did not "get" what the immediate future would be. Robson writes:

"Imagine you are offered a deal with your bank, where your money doubles every three days. If you invest just $1 today, roughly how long will it take for you to become a millionaire? 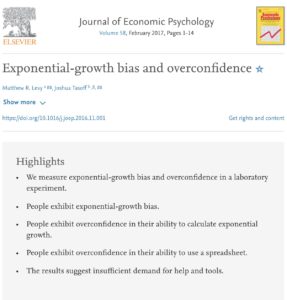 If your estimates were way out, you are not alone. Many people consistently underestimate how fast the value increases – a mistake known as the “exponential growth bias” – and while it may seem abstract, it may have had profound consequences for people’s behaviour this year."

People do understand linear growth, but even if they've been trained, they are biased against accepting the consequences of the accelerating growth rates of exponential growth. I discovered that there's a cool, scholarly literature about this bias in finance and accounting research e.g. Levy and Tasof's 2017 article in the Journal of Economic Psychology: Exponential Growth Bias and Overconfidence. 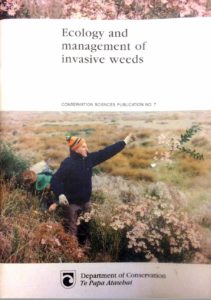 If the Exponential Growth Bias is why many people don't understand how compound interest works it's also the reason why many non-indigenous invasive species fail to be contained. As Peter Williams explains in his clearly written Ecology and Management of Invasive Weeds report published by the New Zealand Department of Nature Conservation in 1997, the best time to control and improve the likelihood of eradicating an invasive species in a cost-effective way, is early on in an invasion. Unfortunately, this kind of intervention rarely happens because the early stages of invasion look like no big deal.

This bias is not only a problem in finance and ecology, but also for infectious diseases, and right now, Covid-19 management. As Robson (2020) writes: "In other words, this simple mathematical error could be costing lives – meaning that the correction of the bias should be a priority as we attempt to flatten curves and avoid second waves of the pandemic around the world." .

The amazing New York Times interactive article from March 22, 2020, How the Virus Got Out, shows how Exponential Growth Bias happened with the SARS-CoV-2 virus (see top figure). At this point, we can only hope to slow its spread while a vaccine is developed, tested and delivered. Then, we just have to deal with the anti-vaxxers.

David Robson's article should be required reading for all Biology professors and students.