Last January, before in-person undergraduate classes were cancelled in March 2020, my 8:30am Winter Semester Applied Plant Ecology lecture covered media literacy and science communication. We discussed where people get their news from, who is behind different media platforms, and the role of social media in public science education.

I'm pretty sure it was Julia Bava (who recently completed a virtual research practicum in my lab.) who asked why more scientists weren't on TikTok (bottom right in above photo). I remember replying that there might be ways to use TikTok for public science, but that other than my Vines (an earlier incarnation of Tik Tok) about how to wrap petri dishes without wasting Parafilm, I couldn't imagine myself talking about science on this particular medium.

TikTok was a disruptive innovation

A year later, I now know that Julia's question was extremely prescient. TikTok, like Twitter before it, became something that we didn't know we needed. To use a buzzword, TikTok is considered by many to be a disruptive innovation. Jon Evan's 2013 TechCrunch article, The Genius of Twitter: A Paen, explains how the micro-blogging platform came out of the blue, was never inevitable, and became something we could never have predicted.

During 2020, TikTok became an unexpectedly influential platform for political parody and commentary. Former Googler, Sarah Cooper, became a breakout star on both this social media platform, and Twitter, for her memorable lip synching to clips of Donald Trump's bizarre musings. Cooper's TikToks cut through the barrage of drivel to bring clarity to just how truly horrible his words actually were. It appears that this may have needled him, because he last summer, Trump threatened to ban TikTok.

On the science communication front, the awesome team of Greg and Mitch at ASAPScience have been nailing it on Tik Tok. Please check them out.

I enjoy watching great TikToks, but in 2020, I have not had much time to engage with the social media platforms in my comfort zone. I use Twitter to keep up with breaking news, including about science. I barely listen to the radio or watch TV news, and Twitter directs me to newspaper articles. I struggle to maintain my content creation on this blog, and try for the occasional foray into Instagram and podcasting.

But, the brilliant Sarah Cooper will be in my life during 2021. Professor Sapna Sharma kindly gifted me Tricks to Appear Smart in (Zoom) Meetings. We had learned about Cooper's 2021 hard copy, desk calendar via her TikToks and Twitter.

As we like to say in ecology, this beautifully illustrates how everything is connected! Happy New Year. 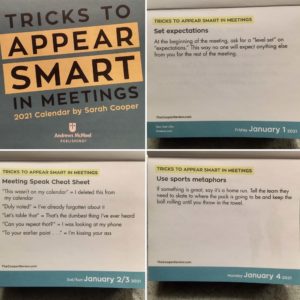