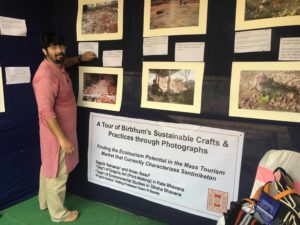 While at Visva Bharati, I gave guest lectures in the Master's programme first year Biodiversity and Conservation course, and also gave workshops on science communication, open access and how to edit Wikipedia. Aman and I collaborated on several projects, including a photographic project that documented sustainable and unsustainable practices and activities in Santiniketan (above left), and an Ecotourism project. Aman also helped me to navigate the Digital Divide, including sourcing open access images from India, for Adventure Canada's European Botany guide, which I finished writing in Santiniketan. I later presented the guide at the Botanical Society of Britain and Ireland's Annual Exhibition Meeting, held virtually in 2020.

My friend and colleague, Professor Emerita Shibani Chaudhury, was one of Aman's significant mentors, and in spring 2018, the three of us discussed the possibility of Aman coming to York University to do a PhD in my lab. Once Aman applied and was accepted to York's Faculty of Graduate Studies, various research opportunities resulted in him deferring his originally planned arrival in Fall 2019 to Fall 2020. Of course, by that point, there were many pandemic-caused travel delays. Aman eventually made landfall in Canada in January 2021. 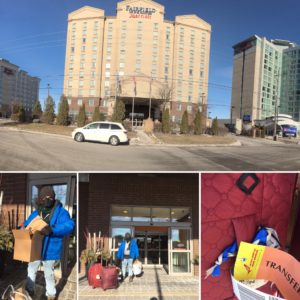 Since his arrival at York, first virtually, and then in person, Aman has immersed himself in his doctoral research, which WILL have some field research, but in keeping with his Physics background, to this point, has been more conceptual and theory-centric, along with crunching a lot of big data with the members of Prof. Sapna Sharma's lab. Sapna is a member of Aman's supervisory committee. Aman's ever-expanding list of research publications can be found at his Google Scholar page.

I have posted the biography that Aman wrote for the Plant Ecology (BIOL 3290) course website when he first arrived in Canada. This was the first course for which he was a Teaching Assistant. An updated biography will be posted on the Current Lab People webpage.

Aman's Biography from January 2021 (in his own words)

I grew up in a small town in India called Santiniketan where I was a student in the school established by the first Nobel laureate of Asia, Rabindranath Tagore. The school encouraged and nurture my love for nature and its importance for every one of us!

In 2014, I graduate with a B.Sc. (Hons) in physics at Visva Bharati University, a national university that was also founded by Tagore.

In-between finishing my bachelor's degree, and starting my master's degree in Environmental Studies in 2016, I taught physics in a local school where most of the students were Santhali. This is one of India's many Indigenous communities.

During my M.Sc. I was a research fellow on a project funded by the UK Research Council. In collaboration with Professor Shibani Chaudhury, I studied renewable energy and anaerobic digestion.

In September 2020, I joined the Bazely lab. as a Ph.D. student pursuing research on systems thinking and global climate change.