The Toronto Envirothon Workshop at #YorkUniversity on April 13, 2017. Envirothons are team-based #HighSchool science competitions that have been around for decades in Canada & the USA. Students form clubs supervised by dedicated teachers, and learn about #Forestry, #Wildlife, #AquaticBiology & #soilscience. A one day, intensive workshop runs ahead of the local, regional competition. The #Toronto #Envirothon competition was held a week later at the #OntarioScienceCentre. The winning team goes onto the provincial competition, and that winner represents the province at the international 🇨🇦 🇺🇸 competition. The Envirothon format includes an environmental problem for which teams must generate & present different scenarios for management solutions. #ONenvirothon #InvasiveSpecies #UrbanForestry #ClimateChange #LocalFood #Ecology #engineering #biology. PS I organize the Toronto workshop with @forests_ontario #DawnsBusyApril2017. Oops, I forgot to tag @utschools! Sorry.

The North American high school Envirothon competition is a team-based competition. I think of it as a cross between a science fair and a hackathon. Envirothon has a tournament structure: local winners go on to the provincial or state contests, and their winners heads to the Canada-US contest.

This year, Ontario will be represented by the University of Toronto Schools Envirothon team, on July 24-29 in Maryland, USA. This winning Toronto area team went on to win the provincial competition in May 2017.

Student teams prepare for their regional competition at their school Envirothon club meetings, and at a local one-day workshop. In mid April, about 45 Toronto area students came to Keele Campus, York University, to learn about (1) forestry ecology, (2) wildlife biology, (3) aquatic ecology & hydrology, and (4) soil science. Faculty, staff and students from Biology, Geography and Engineering run these workshops, which take place in Lassonde's Bergeron Centre and in Lumbers labs. Undergraduate volunteers guide the student teams around the campus. You can see all us in the Instagram deck above.

In addition to these four workshops, the manager of our local Black Creek Community Farm presented a fifth workshop about locally produced food, and food security. On the day of the Envirothon competition, the student teams must not only demonstrate their learning about environmental science, but also craft a practical solution to a hypothetical environmental issue, and present it to judges. In 2016 the scenario posed to the teams was one about managing invasive species, and in 2017, students were presented with a local agriculture challenge.

I got involved in the Toronto Envirothon as a judge, heading to the Ontario Science Centre for the competition in 2014 and 2015. I was so impressed with the programme, that I brought the workshop to the Keele campus in 2016. In 2017 about 45 high school students took the workshop.

The University of Toronto Schools team that won the 2016 Canada-US contest was here again, this spring, with some new members, since some previous members (below) are graduating high school. I wish the team all the best in Maryland in a few weeks.

In the photos below, we're in Queen's Park Legislature, for the December 2016 Christmas Tree reception for Forests Ontario, which organizes the Ontario Envirothon. The reception is in the apartment of Hon. Elizabeth Dowdeswell, the Lieutenant Governor of Ontario.  York University student volunteer, Barinder Kallay, looks very smart, as do the winners of the 2016 Canada-US Envirothon, with their teacher, from UTS. Check out the posh tea cups! 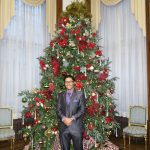 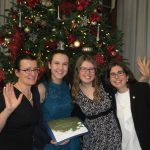 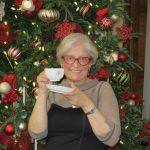