The 2017-18 Canadian academic school year has begun, and I kicked it off by creating a rather ruthless-sounding auto-reply. 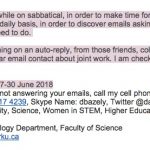 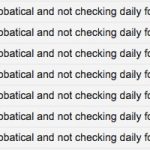 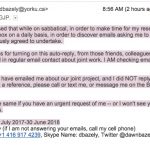 Paid sabbaticals, every 7 years, are a huge privilege that allow tenured professors to expand our research skills and knowledge. We're paid a reduced salary to "boldly go where no-one has gone before", or at least do some of the research that we have likely been thinking about for years. In my case, I have two unfinished books and 10 journal articles. It is a truth universally acknowledged, that all academics have cupboards full of unwritten manuscripts and under-analyzed data. This is known as the file-drawer problem, and is related to the problem of publication bias, where we tend to prioritize publishing significant and novel results, not boring replicated results.

I'm weaving together my interests in Women in STEM, technology, citizen science, and open access, and I'm learning how to do historical research. Archives are even involved. Since the last time I wrote a footnote was for a 1978 philosophy essay, I have found a co-author who is a bona fide History professor. I'm also being mentored by several historians and archivists. It's a steep learning curve, but I'm learning new research approaches. I hope to bring new perspectives to the field of botanical history in Canada. In conversations with historian and archivist colleagues, I've learned that my insights may even be quite novel, coming as they do, from an interdisciplinary perspective, and of interest to historians of science. Amazing!

I will spend January to April 2018 with my colleague Professor Shibani Chaudhury in India at Visva-Bharati University, continuing our research on bioassays. I'll also learn, first-hand, about her work on green energy coming from solar and composting biomass.

What is the point of sabbaticals?

I was motivated to write this post because I was dismayed to see a tweet from ecologist, Professor Dez Huber at UNBC. @docdez (his twitter handle) is a Canada Research Chair in the Department of Natural Resource Management. I wondered if these academics were trying to make Dez feel guilty about his sabbatical? Sounds like it, and I hope he didn't. I wrote about being a mother of young children for University Affairs during my second sabbatical, in 2004-5. Looking back, I still have no doubt that without my first sabbatical, I may well have quit being a professor, due to the combined pressures of work and family.

The reality is, that if you're a professor at Canadian public university, and you are diligently fulfilling your responsibilities of teaching, research and administration, then you're almost certainly headed towards burn-out, on some level. I'm acutely aware that my hard-working contract and part-time colleagues don't have access to paid sabbaticals, which worries me: they spend untold hours developing new course material, and trying to keep up with research. The contract faculty that I work with, are all very tired.

Consequently, the statement, from, presumably tenured faculty, that they don't need a sabbatical, raises questions about how they're spending their time:

If a professor truly feels that they are caught up on research, and don't need a sabbatical, as Professor Nota Klentrou is quoted as saying, and whose husband, Dr. Papengelaki, is also a professor, then, surely, statements like this ought to be accompanied by a caveat that they understand their privilege.

When our kids were young, my husband worked long hours, and was often out of town for days, if not weeks, leaving me juggling parental duties with my research, teaching and administrative. I envied the kind of flexibility that families with two academic parents enjoyed.

My sabbaticals are vastly different from those of my graduate supervisors, who travelled with their wives and families to distant countries for an entire year. Nevertheless, while the actual logistics of sabbaticals evolve, they are vital for academics to have the time to recharge, think, learn and do research.