I will always have a soft spot for Google, hailing back to 1999 when I used to recommend it to my ecology students, as a cool up-and-coming internet search engine.

This continues, despite my fairly strong opinions about the need for tech giants to be regulated, and for large portions of their staff, including the leadership, to undergo ethics training. 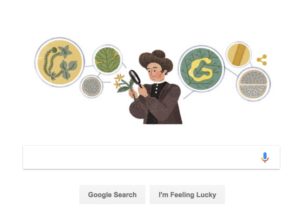 I remain a huge fan of Google Doodles which launched in 1998. I first viewed the doodles as a groundbreaking educational engagement tool, but more recently I simply find myself checking out their home page, to learn about the doodle artist, and where in the world the Doodle was shown (you might be surprised at this).

In 2019, I didn't have much time for Google Doodles beyond seeing them on the search screen. Therefore, I made a 2020 new year's resolution to slow down, and check out the people and history behind the Google Doodle more often, because it offers a welcome opportunity for reflection.

During my very hectic 2019, something happened every now and then that caused me to stop, take stock and reflect a bit. On Dec 16, 2019, at 7:18 AM, I sat down and wrote the following email in about 30 minutes in response to a tweet from Alan Shapiro (below), the founder of Science Slam Canada. It's amazing what I can do when I manage to maintain focus without interruption for longer than ten minutes. 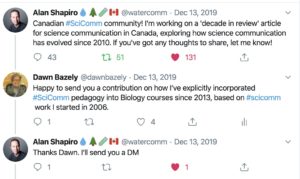 here are some thoughts on your proposed article that I hope will be helpful for you.

Some comments on trends in science communication in Canada over the last 10 years:

1) science communication has always been a thing in Canada

5) emerging events for which I provided informal mentorship and encouragement: Science Literacy Week and ComSciConCan

1) Science communication has always been a feature of Canada's research space and institutions, via science journalists in mainstream media, who generally access scientists through media/pr offices of research and education institutions.

e.g. NSERC had a magazine and I had a letter praising its excellent science communication published in it around1980!

idea: for your article, you could track down that NSERC magazine -- I can't remember the title, but it had fabulous art

I've ignored this disincentive for decades, and taught, organized and delivered excellent science communication in multiple formats, spaces and media -- and YES, I was, often criticized for doing public science, as it was assumed to come at the expense of peer-reviewed research publications.

But, I did it anyway and when I became Director of the Sustainability Research Institute (2006-14) I really focussed on it -- communicating about climate change, sustainability etc. I learned to wrote blog posts and I supported and developed great looking communications via websites, blogging -- actually, we were often more effective in getting our messages out than the central PR office!

In my opinion, as a professor for 30 years now, who has always focused on excellence in science communication (public science) in mainstream media, K-12 (grade 13) and various public spaces, there is a direct tie between excellent science communication and public political support for basic research -- note that I am unaware of research that specifically tests this hypothesis -- you could look at this literature.

A. Institutional support for Public Science as legit academic practice: we have seen increased emphasis in the UK (named chairs -- see Dawkins and Al Khalil) and USA (dedicated AAAS and ESA training on "how to speak to politicians" and science diplomacy) on the Public Understanding of Science -- but Canada has been far behind this -- despite people like me writing about and calling for improved policy, positions and recognition of this in the T&P process

B. Canada got some formal training for scientists (as opposed to science journalists) - Laurentian U. and Banff science writers festival -- now based in Calgary (Beakerhead) -- I have sent students to the former and worked with organizers of the latter on a couple of things.

In 2011, myself, and colleagues Burke Cullen, Jim Handman and Penny Park (sadly deceased) began developing the six week Seneca science communication summer school which has only run once, due to internal politics at Seneca.

Penny also looked to me for support when she and colleagues at UBC launched The Conversation Canada:

C. There was finally, a broad-scale realization in the Canadian STEM community, with Harper government's war on science, that science IS political and that scientists needed to up their communications game and participation in science-policy-politics spaces:

NOTE -- I was a co-organizer of the 2017 Toronto March for Science. Not many professors got involved at the organizing level.

4) Dawn's evolving strategic and tactical efforts and activities aimed at improving and enhancing Sci Comm in Canada during the last 10 years:

A. Include science communication talks as part of traditional Biology department seminar series -- this was a new thing, because we usually focus on research. I could only get Dr. Jim Woodgett a spot in the biology seminar series because he's such a big deal in the research world!

Now, I see that Biology seminar series at Ontario universities often have this kind of seminar -- I sometimes give them -- Waterloo, McMaster -- whereas before, I only spoke on my science research.

Of course, YorkU now has a science communicator-in-residence and training workshops:

B. Organize and participate in non-traditional public science events:

-- not just in schools and mainstream media (I've continued to do lots of this) but also expand this to Public Libraries and other more unusual spaces where public science, outreach and engagement can happen:

C. I have always developed innovative, non-traditional writing assignments and activities in my undergraduate courses. From 2013, when I returned to undergrad teaching after being an administrator (research inst. director), I developed new ones to include explicit Digital Media Literacy and Sci Comm skills.

My students, colleagues and I recently presented at the Digital Pedagogy Conference in Waterloo University.

At YorkU, in the 1990s, I was the primary professorial stream faculty member in science innovating and pushing these skills at an institutional level. There were other colleagues, but their efforts weren't sustained for as long as mine. When I was doing this, it was often as a lone voice for decades, with the support of some staff and Teaching Faculty! Now, lots more colleagues do it, which is fabulous. Here are a few blog pots of many, on this.

D. I continue to aim to be approachable and available for chatting science and giving science advice and guidance to both non-scientists and scientists from countries and institutions seeking support, including via Social Media

E.  I encourage, support, organize and participate in Citizen Science:

Early on in their inception, I was contacted by, for support, and had mentored, and encouraged both the young people who founded or brought those events to Canada:

Dr. Cylita Guy lived in my basement during her bat field work in Toronto!

Early on, I encouraged Jesse Hildebrand to make sure that he got paid by NSERC for doing his work!

I hope this perspective informs and helps your review. Best of luck with what I think is a very useful endeavour!